Farsley Celtic twice fought back from a goal down to make it eight consecutive league wins with a 3-2 victory over Witton Albion.

Manager Adam Lakeland was full of plaudits for his players after the game, saying: “It’s a great way to finish the year, I think the players have been incredible this year, and we were desperate to finish it with another win.

“We were bare bones today, had to dig really deep, and every man was all hands to the pump and thankfully we managed to get the win.”

Witton started the game brightly, looking nothing like a side struggling in 16th, going close as Greg Hall’s long ball found Matty Devine who blasted over.

Farsley ‘keeper Kyle Trenerry was then forced into action as Jack Higgins’ pass fell straight to Will Jones, but his strike from 20-yards out was pushed away from the bottom corner by Trenerry.

The hosts deservedly took the lead just after the half-hour mark, Tom Owens robbing the ball off Adam Clayton and dinking the ball over Trenerry and into the net.

Falling behind seemed to wake the Celts up, with Greg Hall reacting superbly to save Jack Higgins’ effort in the box, and then moments later he saved Luke Parkin’s effort well.

With half-time approaching the Celts’ pressure told, a terrific cross from Luke Parkin allowing Higgins to volley home at the back post from six yards out.

Farsley started the second-half looking to edge in front, and came close as Greg Hall punched Luke Parkin’s free-kick only as far as Dave Syers, but his effort was palmed away by Hall.

With Farsley dominating proceedings Witton stung the visitors on the counter, Matty Devine playing a long ball to Will Jones who was brought down by Kyle Trenerry in the penalty box.

James Foley stepped up and emphatically converted the spot-kick to regain Witton’s advantage.

However, Witton were in front for less than a minute as the Celts responded immediately, Dave Syers volleying home a spectacular volley into the top corner from 20-yards out to equalise.

Trenerry then made amends for giving away the penalty as he made a terrific save from point blank range to tip over Billy Smart’s effort following a scramble in the box.

Five minutes later Trenerry came to Farsley’s rescue once again, as Will Jones broke through and the Farsley ‘keeper made a great stop with his feet.

With three minutes remaining it was Nathan Cartman who decided the outcome of the game, receiving the ball from Paul Walker after great work from Isaac Baldwin, and curling home into the bottom corner to snatch all three points. 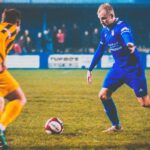