Farsley Celtic made it nine consecutive league wins with a 1-0 victory over Hednesford Town.

On a crisp afternoon at Keys Park, a first-half strike from Nathan Cartman was enough for Farsley to take all three points, with Adam Lakeland’s side now having lost just one of their last 21 games in all competitions.

After his side’s victory, Adam Lakeland said: “It was a battle, certainly that last 15 minutes, but I felt we dealt with it. We restricted them throughout the 90 minutes to very few opportunities, and massive credit to the players.”

It was the Celts who started the game on the front foot, as Chris Atkinson’s ball intended for Ben Atkinson dropped to Nathan Cartman on the edge of the box, but he could only shoot over.

Hednesford shot-stopper Josef Bursik was then called into action, doing well to save Luke Parkin’s effort low down.

Cartman came close again midway through the half, as he latched onto Ben Bailey’s weak header, but his attempted lob drifted wide.

The hosts had a terrific chance to then take the lead on the counter, as Andre Johnson crossed to Lewis Archer who failed to turn the ball home from inside the six-yard box.

Farsley did take a deserved lead courtesy of Nathan Cartman with 10 minutes remaining in the half, as he controlled Kyle Trenerry’s long ball and delightfully clipped the ball over Bursik and into the back of the net.

Kyle Trenerry had to be at his best to prevent Hednesford from responding immediately, making an excellent save when one-on-one with Archer.

Hednesford came inches away from levelling shortly after the interval, as Charlie Gatter’s header from Jack Hallahan’s corner was cleared off the line by Ben Atkinson.

Dan Cockerline was the next to come close for the home side, as his header from Alex Melbourne’s cross was blocked by Jack Higgins.

The hosts continued to pile the pressure on a resolute Farsley defence, as Higgins again made a terrific block to prevent Dan Cockerline from scoring against his old club from close range.

With time running out the Pitmen were unable to trouble Trenerry despite spending most of the last 15 minutes camped in the Farsley half. However, they did come close when Michael Howard worked himself space on the edge of the box, but could only drag wide, with the Celts surviving for the victory. 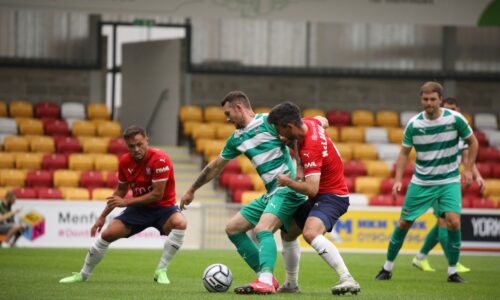