Nathan Cartman had put the Celts 1-0 ahead in the first half, which they totally dominated, but a defensive error allowed Liam Hardy to equalise on the hour mark.

The visitors dug deep in the final quarter of the match though, and were rightly rewarded as Spencer fired home the winner with nine minutes left to play.

Farsley looked sharp from the start against play-off chasers Buxton and were unlucky not to go ahead after five minutes as Cartman played a deft cross to Ben Atkinson who headed towards the corner of the goal. However hosts’ keeper Theo Roberts made a great save down to his left to deny the midfielder.

Then on 10 minutes, Danny Ellis was equally unlucky not to put his side ahead as the defender crashed a header against the bar from an in-swinging corner.

Buxton’s only dangerous chance of the first half came four minutes later as the ball fell to Scott Sephton but he dragged his shot wide of the upright.

But the Celts continued to dominate and former Wigan Athletic keeper Roberts made another good save to deny Ben Atkinson for a second time, as he palmed a dangerous strike behind for a corner.

However that corner led to the opener as Ellis headed the ball back across the area to the feet of Cartman who, with his back to goal, pulled off a brilliant turn and shot which went trickling under the goalkeeper.

Farsley continued to pepper the hosts’ goal, with Spencer coming within inches of doubling the lead on three occasions before the interval.

Cartman almost netted again on the 51st minute as he was played in by Paul Walker, but the striker scooped his effort just wide.

Buxton almost grabbed an equaliser on 54 minutes as substitute Diego De Girolamo headed goalwards but Kyle Trenerry made a great save to keep his side a goal to the good.

However on 61 minutes, Adam Clayton was shrugged off the ball which allowed Hardy a one-on-one opportunity with Trenerry, and Buxton’s prolific striker fired home for 1-1.

Despite the setback, Adam Lakeland’s side continued to produce the better chances in the game’s closing stages and almost re-took the lead four minutes later as Dave Syers showed great vision to pick out Spencer with a long-ball but the striker’s volley was just wide of the target.

Two minutes later, the ball was in Buxton’s goal as Ellis headed home from Will Hayhurst’s cross but the centre-half was denied for a second time in the game, this time by the offside flag.

The barrage continued and on the 70th minute Cartman picked out Syers, but the midfielder’s header was straight at goalkeeper Roberts.

Then on 77 minutes, a long corner found Spencer at the back post however his powerful volley rasped the side netting as he again came so close to netting.

But the lively forward was finally rewarded four minutes later via a quick counter attack as Walker found substitute Isaac Baldwin, who crossed to Spencer who slotted home to put Farsley back ahead.

With Buxton committing men forward for an equaliser, they were almost caught out two minutes from time as a weak back-pass sold Roberts short and his attempted clearance was blocked by Hayhurst. The left-back had to go around two defenders before shooting but the ‘keeper made a strong save to his left to turn the ball wide.

Despite five minutes of stoppage time, Buxton were unable to trouble the Farsley goal as Celtic secured a deserved 2-1 victory, to remain a point ahead of South Shields, who beat Hednesford Town 4-1 this afternoon. 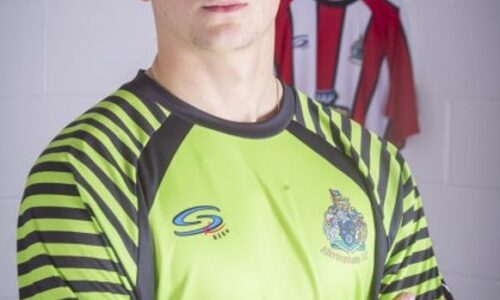