Farsley Celtic made it eight consecutive wins with a comfortable 4-0 victory over Grantham Town.

Jimmy Spencer was once again the star of the show as he fired in a stunning hat trick, whilst Nathan Cartman also got on the scoresheet as the Celts moved three points clear at the top of the division.

After the game, a delighted Adam Lakeland said: “It was a great performance by everybody, obviously Jimmy’s the one who’ll get the plaudits for scoring a hat-trick, and it was a great hat-trick, his third goal in particular was fantastic.

“I said to the lads after the game that for every goal we scored today the work rate and the pressing for us to win the ball back and then release people to score was outstanding.”

Kwame Boateng was also singled out for his excellent performance, as the Farsley gaffer said: “Every time he’s come on, he’s been fantastic for us, he’s got really good defensive qualities in a one v one situation, and he doesn’t get flustered.

“In the second-half he managed to get up the pitch a bit more and he showed good composure in possession and played his part in the fourth goal.”

It was almost a dream start for Farsley, as Dave Syers had a great opportunity inside the opening minute but failed to hit the target.

Nathan Cartman then had a terrific chance to break the deadlock, as the Celts broke and Paul Walker squared to the forward who sliced wide.

Farsley were then dealt a blow as Dave Syers was forced off injured after just 13 minutes, with Kwame Boateng coming on his place and Ben Atkinson moving into midfield.

However, the Celts continued to dominate, and somehow failed to score as Jimmy Spencer’s shot was parried by Sam Andrew straight to Cartman who saw his follow-up blocked, before Jack Higgins blasted over from close range.

Jimmy Spencer then deservedly gave his side the lead 25 minutes in, as he controlled Will Hayhurst’s cross and fired back across goal past Andrew.

After going behind, Grantham threatened Farsley’s defence for the first time as Jamie Jackson and Jordan Adebayo-Smith broke, but Boateng and Chris Atkinson recovered well and combined to scramble the ball away from the six-yard box.

Just two minutes into the second-half it was 2-0, as Ben Atkinson slipped the ball through to Spencer who coolly slotted the ball home.

It was soon 3-0 as Jimmy Spencer wrapped up a stunning hat trick with his 25th goal of the season, picking the ball up 25-yards out and rifling an unstoppable strike past the helpless Andrew.

Chris Atkinson was the next to test Andrew, as he let fly from distance but his powerful strike was straight at the Grantham ‘keeper.

The three points were then wrapped up with 10 minutes remaining, as Kwame Boateng played a delightful through ball to Luke Parkin, whose effort was tipped into the path of Nathan Cartman who tapped home from close range. 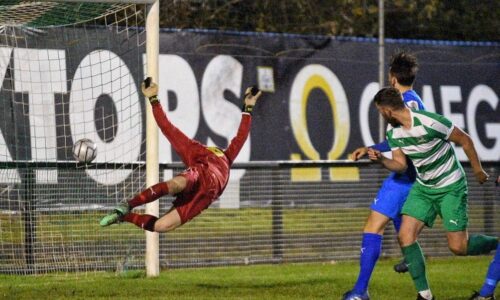