In November 2018 Dave Syers re-joined the club he had played in 2009/10, and went on to play a crucial role in our title-winning campaign.

Syers signed on for 18 months until the end of the 2019/20 season, meaning that he will remain a part of the squad that achieved promotion to the National League North.

The ex-Bradford City midfielder made 26 appearances after he signed from Darlington, scoring nine goals including a number of crucial and spectacular efforts.

Syers is delighted to remain a part of the Celt Army, as he said: “It feels good to not have to worry about sorting out a contract this summer. I am just able to relax and enjoy the time off before preseason starts.

“When I joined, we were fourth but with games in hand on the teams above.

“When I met Lakey and we talked about me signing, the aim was definitely finishing as champions, and looking at how the playoffs worked out this year, it became a lottery which we wanted to avoid!

“It was a great feeling when we scored the second against Marine on last game of the season!

“One of the biggest compliments I can give this squad is that I always felt confident that we would get over the line, even with South Shields and Warrington Town hanging in there.

“You could always rely on someone to pop up and get us the three points in any game.

“I’m excited about next season as we are gaining some derby games against the likes of York, Guiseley and Bradford, and I think we will surprise a lot of teams in this division.” 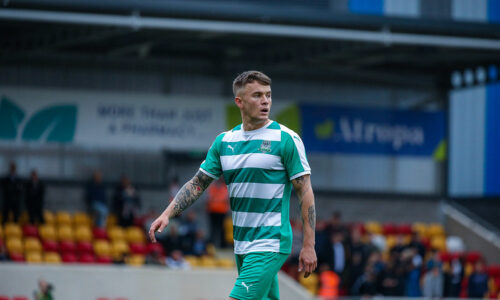