Farsley Celtic earned another important three points in an action-packed afternoon at the Citadel, with a 3-2 victory over Kettering Town.

Goals from Dave Syers, Tom Allan and Will Hayhurst were enough for Farsley to secure the three points, with efforts from Marcus Kelly and Brett Solkhon not enough for the visitors.

Farsley Celtic Manager Adam Lakeland was pleased with the three points as he commented: “It should have been easier, I thought we were the better team.

“I thought we started the game very well, obviously Chris Atkinson’s smashed one over from a corner inside three minutes and then we’ve won the penalty which we missed.

“Once we got that second, I thought we’d kind of go on then, I felt we were great value, but the referee, it’s a soft free-kick for me that he’s given them.

“The game was closer than I felt it should have been, I felt we were the better team and obviously with it being 3-2 then it causes a bit of pressure, tension in the last 10 minutes.”

Just five minutes in the Celt Army had the chance to take the lead after being awarded a penalty as Tom Allan was brought down by Mick McGrath, however the opportunity was squandered as Ben Atkinson dragged the spot-kick wide.

Kettering were inches away from taking the lead as Ben Milnes unleashed a low strike from the edge of the penalty area that left Kyle Trenerry unsighted, but fortunately for Farsley it struck the upright and rebounded to safety.

Farsley then broke the deadlock as Jordan Richards whipped in a simply sumptuous cross for Dave Syers who was able to run onto the ball and firmly head past Paul White in the Kettering goal.

Syers could well have doubled his side’s lead 30 minutes in as he robbed Javan Videl 25-yards from goal, but the Farsley midfielder shot straight at White when one-on-one.

The Poppies believed Farsley should have been reduced to 10-men shortly before the interval, as Lindon Meike lobbed Trenerry before being caught by the onrushing Farsley shot-stopper, but his strike bounced agonisingly over, and Trenerry was cautioned.

Farsley controlled the game after the interval and Jordan Richards was the provider once more as the Celt Army made it 2-0 20 minutes into the second-half, Tom Allan heading his excellent delivery into the goal.

Jimmy Spencer almost further extended his side’s lead, latching onto Danny Ellis’ long ball before attempting to lob White who was caught off his line, but his effort drifted just wide.

With just over 15 minutes remaining the Poppies halved the deficit as substitute Marcus Kelly curled a fine free-kick from the right-hand side into the far top corner.

Farsley soon re-established a two-goal advantage as Spencer slipped in Luke Parkin, and his low effort was parried straight to the feet of Will Hayhurst by White who rolled home.

Kettering once again pulled a goal back, almost immediately from the restart, as Connor Kennedy squeezed a low cross into Brett Solkhon who was able to bundle home from close range.

In the closing moments Tom Allan headed against the crossbar from another superb Jordan Richards delivery, before Danny Nti missed a guilt-edged chance for the visitors in added time. Nti got free in the box but could only head Lindon Meike’s cross straight at Kyle Trenerry from six-yards out, and Farsley held on for the three points. 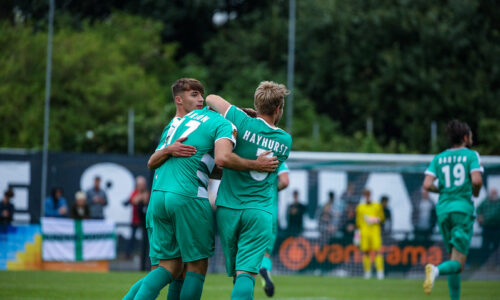 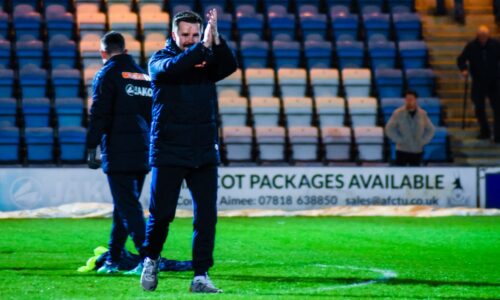