Farsley Celtic fought back from a goal down to secure a point for the second time this weekend as they drew 1-1 with Blyth Spartans.

The Spartans could have been out of sight if not for Tom Donaghy, who made a number of splendid saves, and some wayward finishing, but Robbie Dale’s strike was their only reward for a scintillating first-half display.

With just a one-goal deficit Farsley were always in the game, and they punished the visitors’ wastefulness when James Hanson scored his first goal for the club to earn the Celts a point after a much improved second-half performance.

Blyth should have been ahead within two minutes. Nicky Deverdics’ free-kick picked out JJ O’Donnell who had the freedom of the Farsley box, but his header was saved superbly by Tom Donaghy who showed stunning reflexes to save low down.

The Celts immediately had a chance of their own at the other end, Ben McKenna slipping the ball through to James Hanson, but the forward could only drag wide.

Spartans skipper O’Donnell was a constant menace in the Farsley box, but he squandered another golden opportunity when his header back across goal from Karl Byrne’s centre struck the upright and bounced to safety.

Byrne then had a chance of his own as Blyth hit Farsley on the break, receiving the ball from Nicky Deverdics on the right corner of the penalty area before his strike was saved smartly by Donaghy.

Shortly after the half-hour mark, the visitors would finally make their dominance count, Robbie Dale playing a swift one-two on the edge of the box before finishing calmly past Donaghy.

It could have been two within a matter of minutes; Dale, who was outstanding in the first-half, showed quick feet to beat two Farsley defenders on the by-line before curling his strike from a tight angle against the far post.

After struggling to breach the Spartans defence in the opening 45 minutes, Farsley started the second-half on the front foot, Luke Parkin having a strike blocked and Jimmy Spencer volleying over within five minutes of the restart.

Blyth remained a threat on the break with their pace up front, and O’Donnell missed a third headed opportunity when he really should have scored, nodding Dan Maguire’s cross wide.

Hanson could then have levelled when he headed McKenna’s cross wide at the near post, but he would atone for that miss just minutes later.

Will Hayhurst’s corner caused all sorts of problems for the Blyth defence, with the ball eventually falling to Spencer whose effort hit the crossbar and dropped to Hanson, who made no mistake to level.

Things then went from bad to worse for the visitors when they were reduced to 10 men with 15 minutes remaining, Callum Painter receiving his marching orders for a high challenge on Hayhurst.

However, Farsley were unable to use the extra man to their advantage, with the closest the Celts came to snatching all three points coming when Will Longbottom lashed over from outside the box. 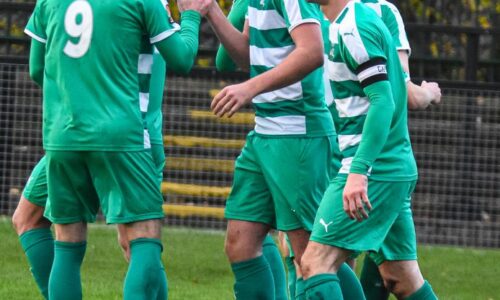 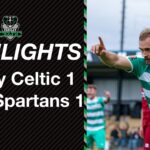